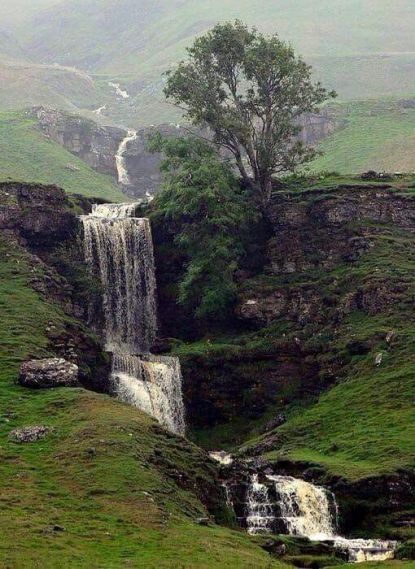 Yorkshire Hills– from my Locations Board

Pinterest is a site that allows users to “pin” and save visual imagery from across the web, and create boards that group like things together, like a virtual scrapbook of ideas. Users can follow each other, or follow particular pin boards that have been curated by users. They can “like” or “pin” an item, and they can also send it to others. It’s visual heavy, rather than text heavy, but the visuals are less about your personal world and experience and more aspirational. Since it is such a visual-driven, scrapbook site, it’s best to curate from professional photos rather than creating your own images, like you do in Instagram. (If you are a pro, or a really good hobbyist then give it a try! And send me your boards).

Pinterest has an interesting (ha!) reputation in social media. I have the feeling that a lot of big media places don’t know what to do with it, and other places see it mostly as a “mommy-blogger” or “idyllic/unrealistic” wasteland of pins that make pinners go mad with desire and frustration. As a woman who loves pretty things and loves making her surroundings pleasant to be in, and loves cooking and crafts and art and design, I see how easy it would be to dismiss Pinterest as just that wonderland/wasteland.

Why use it as an author?

Even though it can be a little aspirational-heavy, and a source for frustration to some, it is also a great place to help an author or creator focus their brand, as well as a useful tool to inspire or stimulate creativity. I’ve gotten so many ideas from Pinterest for both my writing and my life, that even if it weren’t very useful for social media purposes, I’d still be writing this post.

As a Creativity Energy Shot:

As a Social Media platform:

I’m just starting to transition my Pinterest into a place that can work as both an inspiration to my writing and a platform for social media engagement, so this list might grow in time. These are ideas I’m already working with, or might try:

Why not try Pinterest’s brand guidelines for business?

Or Reedy’s Step by Step Guide if you’re really new to the whole concept.

This site uses Akismet to reduce spam. Learn how your comment data is processed.