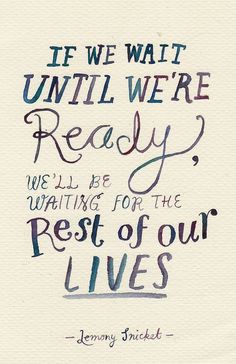 Today I got an email from an agent I’d queried over the summer. Although she had some positive things to say about aspects of my writing, she passed on the novel. I think her reasons for doing so, and the criticisms she gave are completely accurate, and it gives me some great things to work on in my current project.

While I’m disappointed, I’m not devastated. I think this is for two reasons:

She did say she’d like to see my future work, so there’s always that! In the meantime I need to write. And I need to start compiling a new list of agents.

What were your first failures like? What got you through them and were are you now? I’d like to know!

Yesterday I printed out all three stories I’ve been working on this fall so that I could read them and begin the necessary work of getting back into my writing habit. I was so busy last semester with my teaching load that my writing got put on hold towards the end.

In addition to that, I felt stymied because I didn’t know what I wanted to be writing. I had several started drafts at once, and felt pulled in multiple directions.  I had finished my novel, and the editing process (for now) and felt like I was back at the beginning, trying to retrace my steps but forgetting the path. I did some of the same things I did before, casting my characters on Pinterest, laying out the acts and the Inciting Incident and all of the crucial steps, but I was still lost and floundering. I knew I had good ideas, and they had the power to be complete stories, but I felt none of the motivation I had previously to tell the story. I felt like I didn’t know my characters very well at all.

For me, character comes out of conflict. I have a harder time with plotting than with coming up with interesting characters. I could spend all day describing and dressing my characters, giving them names and backstories and quirky traits. But I have a harder time knowing what their story will be. So I start with the harder stuff: figuring out what the central conflict is. Then, I look at the conflict and try to figure out what kinds of characters might be involved in that conflict. From there, I figure out where that character’s motivations and goals collide with the conflict. And I can work backwards to flesh out their character from that.

I finally realized, after lots of pondering and stewing and re-reading of my first pages that I had two great characters but nothing for them to do. So, I at last harped on my conflict, and must now go back to the discovery stage so I can work out the changes that this conflict will mean on my characters. Wish me luck! It’s scary to realize you messed up and have to start over! But, falling down and getting back up is part of the process.

Now, I’m going to write for 20 minutes because that is how I ease myself back in, and avoid too much procrastination. You can do anything for 20 minutes!

I’ve been steadily working on my second historical novel over the summer, plugging away at it, a few hundred words at a time. It’s slow, but I know where the story is going and for the most part I like my characters. It’s hard to say, as it’s just the first draft, but I care about them right now, and despite that, I’ve sent them through some shit and have more to come.

But, as I was working my summer job (waiting tables at a nearby restaurant) I’ve been bombarded with two new ideas that have come rapidly and nearly fully formed. In the first, parts need fleshing out, but the beginning structure, the voice, the characters are all showing up and taking over, even if I’m not ready to tell their story.

In the second, I had to get home and start writing immediately, too impatient to care much about anything else, and it is this story that has been driving me to the keyboard obsessively over the past few days. I started it last Sunday and I’ve already written nearly 11,000 words, which is a rarity for me. I can write 1,000 easily, and have to stop before I’m truly finished so that the pump is well primed for the next session.

I feel some guilt about putting the first story, the historical, on hold, but it was losing its fun factor, and although I like it and want to finish it, I need to find the fun again. These other stories (only one of which is in the draft process) are fun, and a challenge in ways the other one doesn’t have right now. I try very hard not to set stuff aside, because this is how I end up not finishing things, but I also believe that taking a break and finding the magic again might be good for me when other things are quite stressed in my daily life.

What are your thoughts? Do you do this too?

Music: Wilco, “Forget the Flowers” from Being There

I’ve gotten feedback from two of my beta readers and mostly they were positive. Hurrah! I cannot adequately express how much of a relief this was. I’d been having momentary bouts of panic a few times a day, questioning whether or not I was being foolish and am secretly a terrible writer. It’s strange. I don’t suffer from that fear while I’m actually writing. No. Then, it’s all “Wow! I am SOO good at this! I’m the best writer ever! Bow before my genius!” But as soon as I let myself become vulnerable by having others read it? I’m a quivering mess.

They’ll learn my secret, that this is just a pile of bones I call a romance novel. They’ll see that I know nothing about love and my own marriage is clearly a fluke, since I know nothing. They’ll see my sex scenes and giggle at the ridiculous notions of sex I have. They will not like the characters at all, and think they are boring.

That is what I start thinking. But luckily, or just because I have very nice friends, they were mostly positive. Of course, I have things to fix, but overall they weren’t terrible. I can breath again.

And now I’m starting a new draft of a new novel. It’s another historical, only this time I’m jumping back two hundred years from my last one, and shifting the focus to French Canada. I don’t want to say too much, but I will say this: RESEARCH can be your best friend. I had some ideas for the conflict but nothing concrete and after researching a little more I’m starting to feel my way through the mire and actually figure out what these characters are deal thing with. Some people hate research. Some say that research bogs down their story telling. For me, research is what pads out my story, like the padding on a dressmaker’s form. The structure of a romance novel is what holds it up, but the research is what creates the final form. At least, that’s my metaphor for it this week.